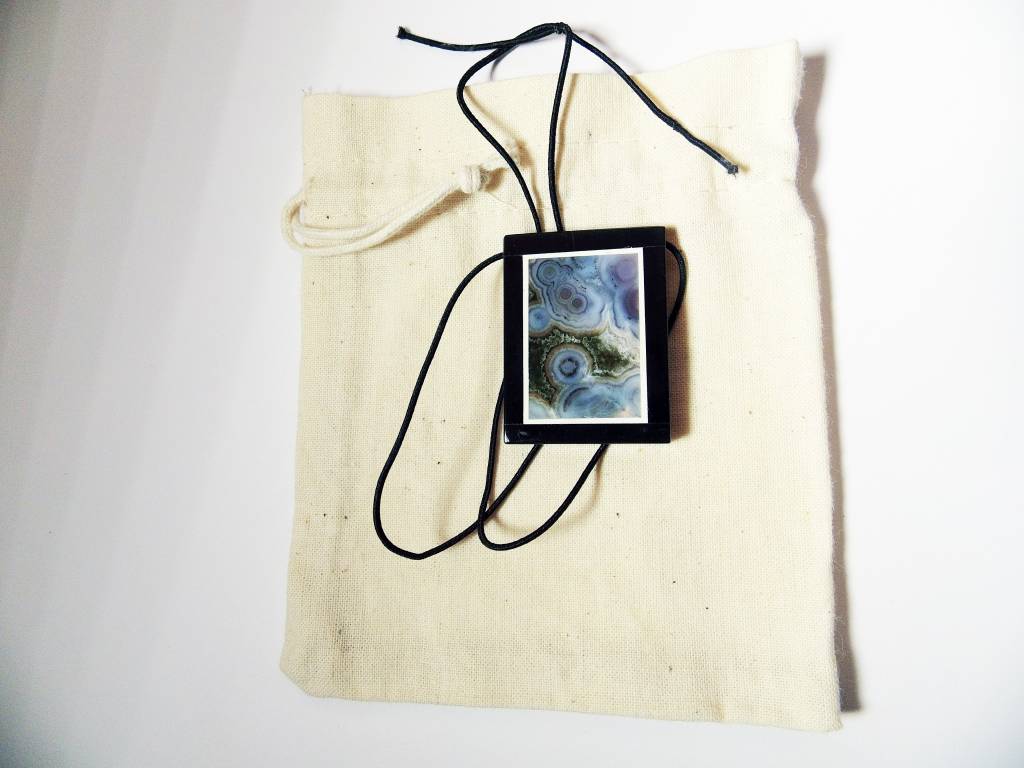 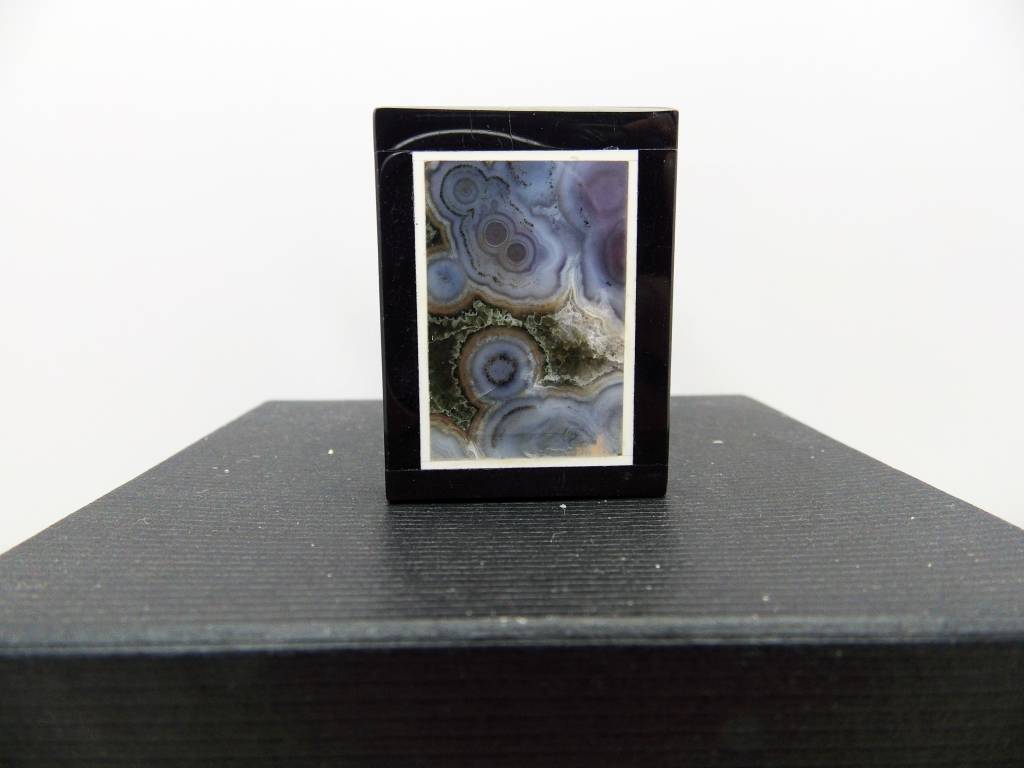 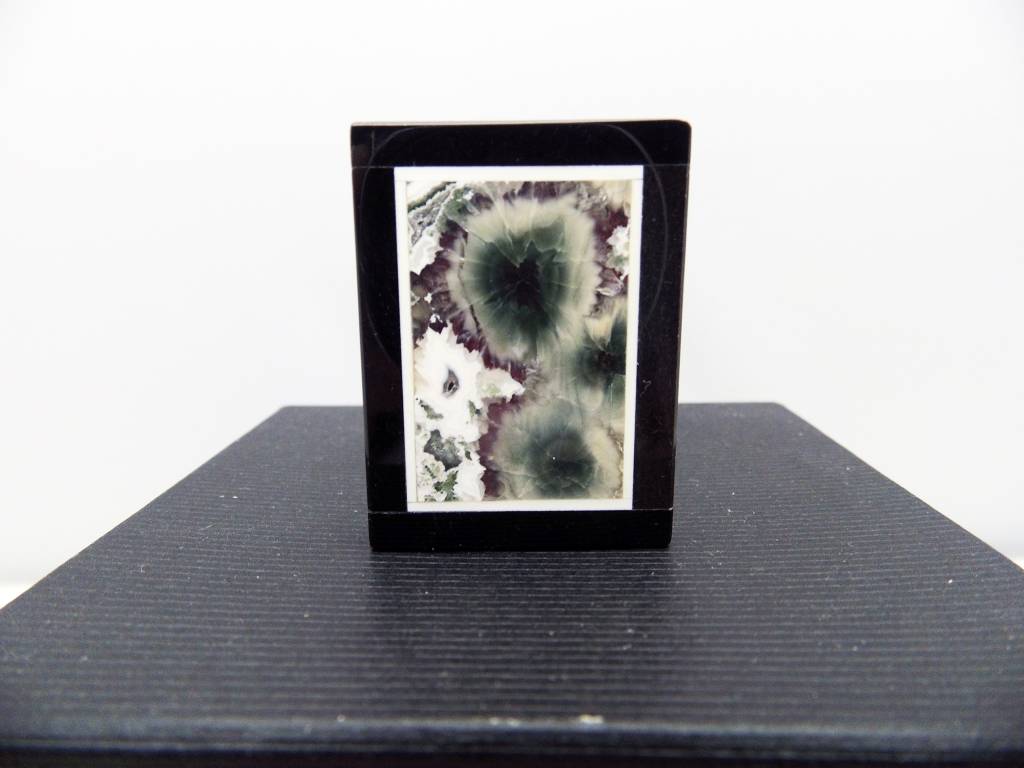 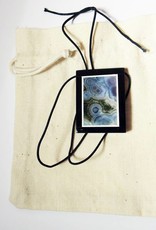 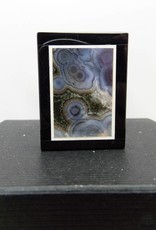 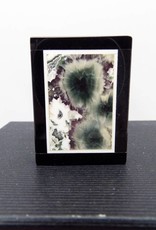 Jasper, a form of chalcedony,[1] is an opaque,[2] impure variety of silica, usually red, yellow, brown or green in color; and rarely blue. The common red color is due to iron(III) inclusions in what is basically a chert. The mineral breaks with a smooth surface and is used for ornamentation or as a gemstone. It can be highly polished and is used for vases, seals, and snuff boxes. The specific gravity of jasper is typically 2.5 to 2.9.[3] Along with Heliotrope (bloodstone), jasper is one of the traditional birthstones for March. Jaspilite is a banded iron formation rock that often has distinctive bands of jasper.

Green jasper was used to make bow drills in Mehrgarh between 4th and 5th millennium BC.[7] Jasper is known to have been a favorite gem in the ancient world; its name can be traced back in Arabic, Persian, Hebrew, Assyrian, Greek and Latin.[8] On Minoan Crete, jasper was carved to produce seals circa 1800 BC, as evidenced by archaeological recoveries at the palace of Knossos.[9]

Although the term jasper is now restricted to opaque quartz, the ancient iaspis was a stone of considerable translucency. The jasper of antiquity was in many cases distinctly green, for it is often compared to the emerald and other green objects. Jasper is referred to in the Niebelungenlied as being clear and green. Probably the jasper of the ancients included stones which would now be classed as chalcedony, and the emerald-like jasper may have been akin to the modern chrysoprase. The Hebrew word yushphah may have designated a green jasper.[10] Flinders Petrie suggested that the odem, the first stone on the High Priest's breastplate, was a red jasper, whilst tarshish, the tenth stone, may have been a yellow jasper.[11]

Jasper is an opaque rock of virtually any color stemming from the mineral content of the original sediments or ash. Patterns arise during the consolidation process forming flow and depositional patterns in the original silica rich sediment or volcanic ash. Hydrothermal circulation is generally thought to be required in the formation of jasper.[citation needed]

Jasper can be modified by the diffusion of minerals along discontinuities providing the appearance of vegetative growth, i.e., dendritic. The original materials are often fractured and/or distorted, after deposition, into myriad beautiful patterns which are to be later filled with other colorful minerals. Weathering, with time, will create intensely colored superficial rinds.

The classification and naming of jasper presents a challenge.[12] Terms attributed to various well-defined materials includes the geographic locality where it is found, sometimes quite restricted such as "Bruneau" (a canyon) and "Lahontan" (a lake), rivers and even individual mountains, many are fanciful such as "Forest Fire" or "Rainbow", while others are descriptive such as "Autumn", "Porcelain" or "Dalmatian". A few are designated by the country of origin such as a Brown Egyptian or Red African leaving tremendous latitude as to what is called what.

Picture jaspers exhibit combinations of patterns (such as banding from flow or depositional patterns (from water or wind), dendritic or color variations) resulting in what appear to be scenes or images, on a cut section. Diffusion from a center produces a distinctive orbicular appearance, i.e., Leopard Skin Jasper, or linear banding from a fracture as seen in Leisegang Jasper. Healed, fragmented rock produces brecciated (broken) jasper. Examples of this can be seen at Llanddwyn Island in Wales.

The term basanite has occasionally been used to refer to a variety of jasper, for example a black flinty or cherty jasper found in several New England states of the USA. Such varieties of jasper are also informally known as Lydian stone or lydite and have been used as touchstones in testing the purity of precious metal alloys.[13]